i've resigned from my job.

talking with people about it has yielded a few interesting remarks but the general feel is that i shouldn't be quitting my job without having one ready to go into. i agree that such a course of action is a wise one but it isn't one i feel works with my current situation.

for starters, when it comes to work i don't generally flitter from pillar to post. in the last eighteen years i've had three main jobs, with a couple of other jobs here and there. i also feel (whether that comes across in my work life or not) a genuine commitment to my workplace, to make it a better place for the long term and to be able to say that when i leave it will be better than it was when i arrived (and, no, not because of my arrival and departure!).

the time has come for me, in my current work environment, to leave. i have my reasons and i'm hoping that i'll find a new job sooner than later. contacts in the industry i work in have already been very encouraging and i will be following up on at least one of them tomorrow! if you feel so inclined, please pray that i won't be looking for very long and that the place i'm meant to be at will be quickly made apparent to me.

several people have asked if i'll move back to sydney. my answer (at this point) is no. my reasons for leaving sydney have not changed and nor have my reasons for moving to melbourne. i love this city. the weather suits me down to the ground, it's easy to get around and people here are so friendly. i love my involvement with sticky (at sidebar, right) and the great friends i've made through it. i'm gradually getting to know people at my new church and i'm looking forward to church camp and joining a small group Bible study very soon. i started my current job because i was moving to melbourne - i didn't move to melbourne because i had found my current job.

i have a cold. my video recorder is kaktus. a friend from school got married last weekend (yay!). God loves me. my life is pretty good.
Posted by dr maya vale at 11:12 pm 3 comments:

imagine my surprise to find when, in a fit of public-spiritedness and interest in current affairs, i decided to turn on channel 9 on the tv while i was eating breakfast this morning, only to find that it's the last broadcast of the sunday programme.

it came as a complete surprise to me that sunday is winding up. all tv programmes come to an end sooner or later - i imagine even 60 minutes will end one day - but i had no idea, had seen or heard nothing about its end in other media outlets - until this morning as ellen fanning reiterated for newly-switched-over viewers that today's is the last broadcast for sunday.

what will come next week? what programmes on australian television will now pick up the baton for investigative, "who knows what we will find?" journalism? helen dalley (now on sky news) commented that the difference between sunday and 60 minutes schools of story production was that on the latter, journalists and producers had researched the stories to the point that when they went into production they would know exactly what they wanted to say and exactly what they were looking at; on the former, journos and producres might not know what they'd find - only that there was a story there worth pursuing. who will do that now? (by the way, how gorgeous is nell schofield??? i think she's even more beautiful now, 27 years after puberty blues, than she was back then...)

perhaps it's even scarier that the 6 o'clock news programmes are advertising stories they're going to run (so-called "special reports") when i would've thought there's plenty to report in the news on an ordinary day without using stocking stuffers that they could put into their 6.30 current affairs (sic) programmes...

peter thompson commented that the australian film industry at the moment is in "deep schtuck". i don't think it's just the film industry. when decisions to cancel programmes like sunday come down from the people who are supposed to be far-sighted about such things, i fear the continued dumbing-down of australian television. calling it "making tv relevant" is a cop-out. in a world that wants to talk (it seems) in a language of icons, top 40 soundtracks and emotion, television seems to be leading the way to letting people slip back into a common baby-talk, instead of encouraging critical thinking and thoughtful consideration of the world around us.

our forebears' fears that television would make people stupid seems to be coming true.
Posted by dr maya vale at 8:57 am 1 comment: 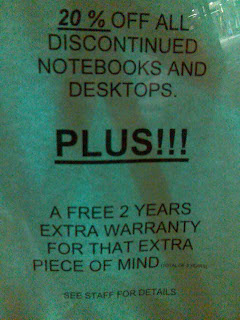 perhaps this should've been an offer for a memory upgrade?
Posted by dr maya vale at 7:19 am 1 comment: